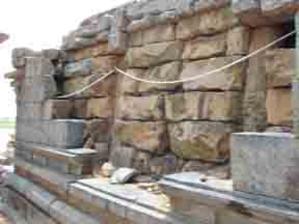 Let us protect the historical monuments to preserve our Heritage

Alundur is an ancient village, with lot of historical monuments. It is within Manikandam Panchayat, Srirangam Tk., and  Tiruchirapalli dt.  It is located at about 19 kilometers south and on the left side of Tiruchirapalli – Madurai national highway.

Nearly 30 years before and based on the information given by the local residence Satyanarayana, Tiruchirapalli based Rajamanikannar varalattru peravai research team headed by Dr.Kalaikkovan had the research and study in this village, and registered their valuable findings in Sentamizhselvi magazine, with the heading “Vaikarai Vidiyalil varalattru Alundur”, also in “Varalaru” and in newspapers. They took immediate steps to preserve some important sculptures and inscription in the Government Museum at Tiruchirapalli. With reference to the ancient inscriptions, they registered lot of information including the name of the village as “Thirualundiyur and Alundiyur”, the name of the lord who abides in this shrine as Sri Varagunaeashwar and others.

Recently, and based on a letter dated 23rd March, 2015, of Sri Varaguneshwar Baktha Jana trust, the archaeo-Symbolist T.L.Subash Chandira Bose visited this archaeological site made a field study in and around the “Alundur” village.  During the field study, a Sula stone with a letter “Ka”, a symbol of Brahma Dharshnam, a symbol of 64 square Maanduka diagram, symbols of birds of non-eating the fruits, a 85 cms long ancient linear measuring scale, an Aashiriyakkal were unearthed. Inscriptions with symbol consist of a five pointed star, a monkey claiming on a sula also unearthed at Sandhanathankurichi near Alundur. In the “aashirakkal, the names of the Lord and his consort are found incised as “Nayanar and Madupathi.

The archaeo-symbolist realized the significance of this particular historical village and Sri Varagunaeshwarar temple, he arranged the following;

On Friday, 17th April, 2015, he organized “The world heritage day celebration” in this village. The entire program was broadcasted by All India radio FM 102.1 KHz, telecasted by Vendar TV and also through Tiruchirapalli based newspapers.

On 14th May, 2015, Dr. Dayalan, The Director (Monuments), Archeological Survey of India, New Delhi, visited this historical site. The director observed there is lot of historical evidence dated back to 3rd - 2nd Century B.C.

On 9th June, 2015 an article with the heading “Aalayam Theduvom” was published in the “Sakthi Vikadan” magazine (reference pages 80-83).

Knowing all the above said, the people of Alundur appeal to all those concerns to come forward to take-up immediate steps for the detailed archaeological study and to renovate the Sri Varagunaeshwarar temple which is almost on the edge of destruction.

Those who are interested to assist and also to participate in the renovation activities may directly contact Sri. Nandagopal – president, Sri Varaguneshwar Baktha Jana trust, his contact cell phone number 91+ 9443839550