A team of historians have found a rare   13th Century Petroglyph of ‘self-realization’ in Yoga Postures in a cave shelter at Kudakumalai in Narthamalai near Pudukottai.

A team of historian and members of Arivom-Arivipom Center (Let us know and Let us inform center) led by Balakrishnan, founder of the center, and Dr. Tamizhlagan advisor, Kannan and Arun researchers and Subash Chandira Bose, the archaeo-symbolist, visited Narthamalai for research tour recently.

During the tour, the team found a petroglyph structure in a cave shelter at Kudakumalai just opposite to Narthamalai. The petroglyph measuring 82 cm height and 39 cm wide consists of two symbols. Of them, the first one is an altar (palibeedam) and second one is a praying yoga aspirant (sadakan), who is standing in yoga posture, which is considered first of its kind found in Tamil Nadu so far.

Subash Chandira Bose said, according to Vastu-Silpa Kosha part one, altar is one of the four holy sections of any temple. The other three are the sanctrum, the main idol of the sanctrum and Vimana over the sanctrum. The altar marks the boundary of the main shrine and it would be constructed in front of the flag staff of the temple.

The petroglyph with two symbols reveals the existence of an ancient temple which has been functioning as a school where Yoga was taught to spiritual aspirants to attain wisdom of self- realization in nearby area. The self-realization can be attained through eight stages of yoga (Astanga yoga such as, Aasana (physical postures), Praanaayaama (breath control), Pratyaahaara (control of sensory perception), Dhyaana (fixed attention), samathi (absolute concentration), Yama (abstention), Niyama (observance) and Dhaarnaa (contemplation). “The main object of the eight stages of yoga is realization on ones’s own soul, the process is described in a detailed manner in the first chapter of Sandilyopanishad, also in Jabaladarshnopanishad, he added.

He further said, every Tamizhian should see the petroglyph, which is believed to be around 13th century A.D., and we should proud about it.

He also said that this cave shelter possessing the most valuable information is one among the protected monuments and also under the custody of Archaeological Survey of India and is 25km away from Pudukottai. 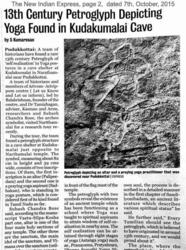 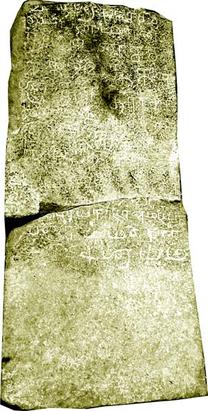 A rare “Aasiriyakkal” unearthed at Alundur
TIRUCHI, April 18, 2015
Alundur is a historical village located at about 19 kms in south from Tiruchy to Mudurai national high way. Based on the information given by Paranikumar and Gurusamy Ganesan, the archaeo-symbolist Subash Chandira Bose studied a stone pillar.

The stone pillar having the measurements 84 cms height × 38 cms wide ×  24 cms thick  was found broken into  two pieces and in front of Sri Varagunaeeshwar temple at Alundur.  By referring the Tamil Dictionary, the archaeo-symbolist identified this stone pillar as ‘Aasiriyakkal’. Which means “a stone inscription erected by requesting a person(s) for the protection”.

The location and exact spot at where the stone pillar erected was mentioned as “Alundiyur Sri Varagunaeeshwaramudaiyar (temple)”and “(Ivuur) Periyanattan Madam”. The names to whom the request was made for protection specified as “Nayanaarum  Madu(pathiyum)”.  The name “Nayanaar” refers to “Lord Siva and Madupathi refers to “Parvathidevi” - the consort of Lord Siva. The purpose of erecting of this stone pillar incised as “Aasiriyam”.  Aashiriyam means physically ‘protection from fear’ and metaphysically ‘protection from fear of death’.  (N.B: The bold letters shown within brackets are in the broken part of the stone pillar or  partially invisible)

With the help of Gurusamy Ganesan, Paranikumar, Nandakkur, Suriaman,  Balakrishnan and Kannan, the ‘Aasiriyakkal’,  joined together and re-erected, facing north within the premises of the same temple and also nearer to a sacred “Bilva tree or Aegle marmelos”.

Reprinted with many thanks

Chandra Bose Trust - Abiding Centre for Ultimate Studies was inaugurated in the city recently. Researchers Ramachandran, Sugavanamurugan and Ramalingam were honoured on the occasion. A book, ‘Tholliyal Andarangam,’ authored by Subash Chandra Bose, was also released on the occasion. 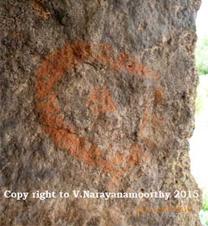 Reprinted with many thanks,

A group of archaeologists from Palani have discovered five dolmenoid cists, probably belonging to the megalithic period, in a tribal village in Dindigul district.

According to V Narayanamoorthy, an archaeologist, who stumbled upon these ancient structures at Kummalamarthupatti in the Western Ghats on Saturday, only two of the five dolmens found in the area were intact. Just the remains of the other three can be seen.

One of them is four feet high while the other one is six-and-a-half feet high. The capstone of the taller dolmen has a diameter of about 10m. The stones were found in a site about 582m above sea level, inside a thick forest. Tribal people who come to the spot seem to use it as a resting spot.

Narayanamoorthy said the capstone might weigh around two tones. It has an 8-cm diameter circle in the middle, which was drawn (facing western direction) in red (oxide) ink. The center of the circle is marked with a red (oxide) point.

He said dolmens pertaining to the Sangam period discovered in this region were usually found facing north. "But these dolmens were placed haphazardly, which prove that they belong to the pre-sangam era and are about 3,000 years old," he said. Pottery chips found at the site had nail mark cuttings, which also pertains to that period.

T. L. Subash Chandira Bose, an archeo-symbolist, said the sign on the dolmen signified that the person buried under it had lived a full life and attained the 'mukthi' state according to Hindu beliefs. "Just a single circle with one middle dot is very significant. Explaining its importance will be a lecture on its own," he said.

"This larger circle with a dot at the centre signifies what we call 'parathuvam,' that is, attaining eternity without rebirth. To my knowledge, this is the first time that this sign has been found in this part of Tamil Nadu. Usually, there would be two or more circles under the capstones," he said.